Models available on this page below:

What I mean by “traditional” is the model of fifes commonly played during the 20th century before the move into more melodic, “flute fifes” that began to appear in the 1950s.  Traditional fifes – usually one piece but sometimes in two pieces – had the tight cylindrical bores of historical fifes but minor innovations to improve playability.  For the sake of compartmentalizing these, I consider fifes made in the “traditional” style during the 20th century to be in this category; the ones played by my father’s and grandfather’s generations in the fife & drums corps that grew during this time.  These models have become collectibles and iconic for both the “jaybirds” and younger hobbyists.  I am privileged to have studied under three of these master-craftsmen and with that, I have come to understand the methods of many more.

Traditional Pitch, when it comes to fifes for this era, fell around A=443 give or take.  It is not an “industry standard” and often a corps, if they gauge their “chosen pitch” at all, will base it on their best player who may play comparatively softly or “roll it in” which will lower the pitch, or “pump a lot of air” into their fife, thus tending towards sharp.  In other words, a typical fifer might play between 441 and 446 Hz.  Some players will slightly move the plug-cork to “tune” their fife but while this can alter the tonic tone to be played (your “D”), it throws the tuning out for the rest of the scale.  Tuning is, in the words of many old timers, “in the fifer, not the fife“; this means it is FAR more about how the fifer blows into the instrument, rolling the embouchure in towards or away from the lips doing the blowing, general posture of the player doing the playing, &c.

While the fife is obviously of the flute family, it is best played like one would regard a piccolo as it reacts as one with the tight bore.  I have had many professional flute players not understand this and wax on about how these instruments are poorly made for they do not play like a flute, only to be chagrined when a folk fifer steps up and rips out a tune.  Please see my page regarding historical fifes.

I LOVED watching Russ turn his fifes on a pole lathe set up at the Sudbury Muster and Colonial Craft Faire every October in Sudbury, Massachusetts.  His fifes had a distinctive appearance – the ferrules – and it became iconic for the Massachusetts “militia companies” fife and drum corps.  Russ has retired in recent years, and it would be a terrible sin to let his fifes fade from memory!  I met with Russ in October of 2022 and received his blessing to recreate his lovely instrument, offering it here.  Made of Rosewood with pewter ferrules; these are the shorter, “presentation” version rather than the longer ferrules many of us know.  Key of Bb “traditional pitch” and includes Russ’ iconic stamp at the top. Quite the collector’s item as well as a terrific traditional style fife! 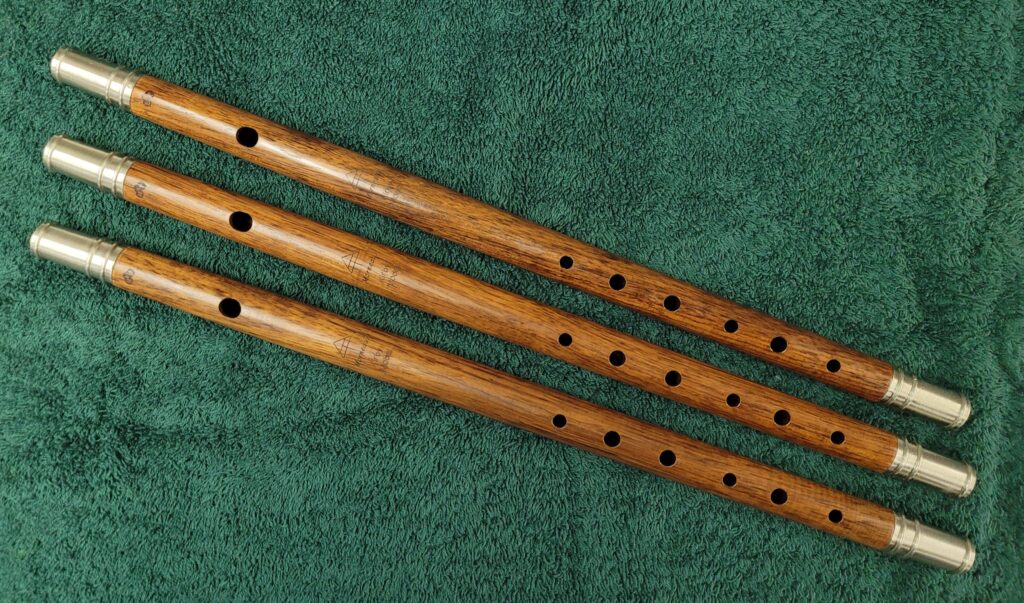 When I was young – the ’70s – pretty much ALL the old fifers swore by this design or model of fife.  It was the standard for some time “back in their day” but it was no longer being made and therefore damned near impossible to get one without inheriting one from family or a buddy.  It was designed by the Cloos Company in the late 19th century and when Penzel Muller bought them out, they continued the model with minor aesthetic alterations.  I have six or seven in my collection, all just a little different but essentially the same; some made by the Cloos Company while some made later by Penzel Muller.  Recently I was commissioned by someone to replicate this and when I placed photos of the progress I was encouraged by some fifers to offer this as a regular choice.  Unfortunately today labour is what we judge the cost of things while in the 19th century the price of materials was the greater affector of price.  So this isn’t cheap but every bit as good as an original.  Head is made of Ebony and the body of Rosewood.  Metal work is German Silver and brass.  Pitched for trad Bb.

These are made to order to expect 6 to 8 weeks lead time.

“You did an excellent job on this replica and it plays very nicely! Thank you so much for your hard work on this project!”   David Degaraff – Williamsburg, VA.