Fifes available on this page below:

10 hole fifes (and 11 hole) with all open tone holes are a latter 20th century innovation and not historically accurate for earlier impressions, if that is what is important to you – these were made to meet a growing demand for still better tuned instruments largely for fife & drum competitions, and the development of the fife provided for greater versatility and more artistic expression.  While flutes in the 18th century began to manifest extra tone holes and keys in custom form, the norm being six holes with a 7th covered by a key that facilitates a D#, the fife was not regarded as a serious instrument beyond its military and folk purposes.  It is in the start 19th century that we begin to find examples of 2-piece fifes and with conical bores (France and Galicia (in Spain); extra tone holes beyond 7 not coming into being until much later; and more noticeably varying tonehole sizes and irregular placement to work towards better intonation.  The musicologist David Munrow made a rather convincing argument with data to back it up that the fife (rather than the flute itself) is the direct precursor to the piccolo… The piccolo began to have keys from the early 18th century but the fife – however closely designed – was not to see the same until the late 19th century with still only six open tone holes, the others covered by lever keys.  All that said – fife and drum today is a style of folk music and unless you are insistent upon a historically accurate approach, play what suits you!

“I have followed you as a fife maker since the late 80s when you worked for Pat (Cooperman).  I have played the fife since the 60s and I honestly have yet to find any maker as good as you. Quality, playability, caring for the customer.  I am always surprised when I meet fifers who don’t know you or play your handiwork.  Thank you for the Ralph Sweet model fife and please keep doing your craft!”   Frank Riccio, New York, NY.

By several requests and finally a commission, we’d begun working on a new model.  This is the MCM (Morneault Contemporary Model) fife.  It features a Boehm head design (like on modern flutes), cylindrical bore, properly undercut tone holes, leeward cutaway for the embouchure, and a wood-on-cork joint that is far better for sealing than metal on metal.   Ferrules/rings are of stainless steel on.  I make the cap usually of the same wood as the fife, but sometimes I make it of something different for contrast per request.  You can let me know at the time of ordering.  The model in the photo is of African Blackwood bodies and the head on the right while the left head is of Padouk Wood.  African Blackwood is the most common choice, but reach out if you have a special request. 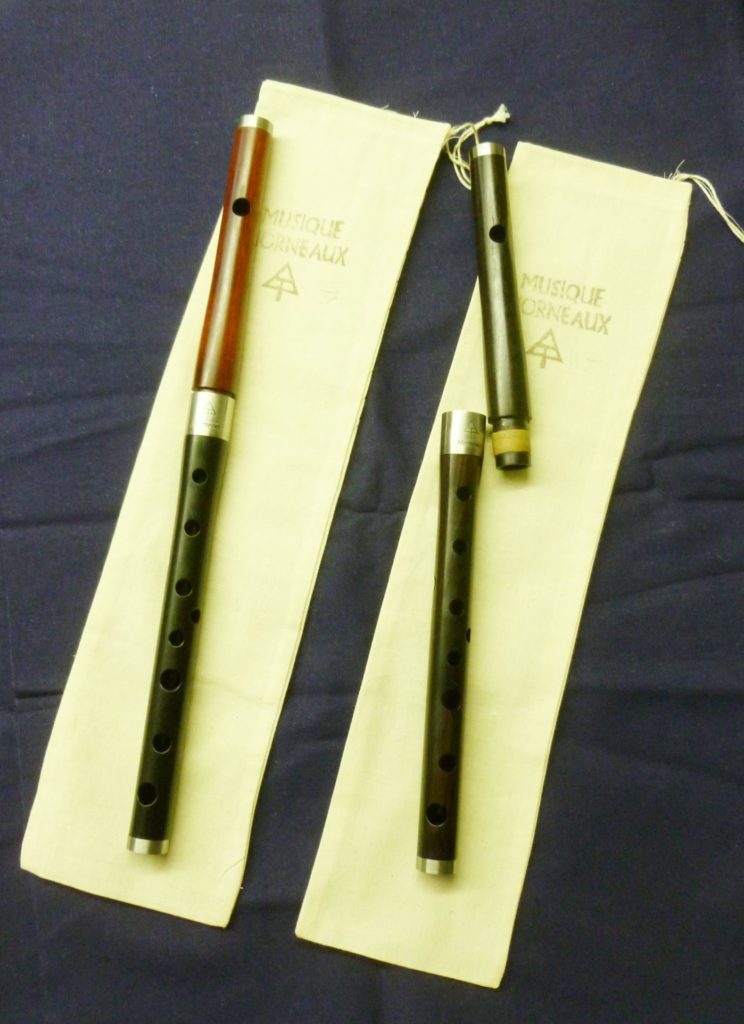 Benjamin Ruesch playing a pair of original tunes: “The Two Claw Jig” and “The Fiddler Crab”, both by Ben. Played on the extraordinary new MCM 10 hole fife from MusiqueMorneaux, handcrafted by Joseph Morneault.

Kate Bolcar and Donald Heminitz playing a duet of the Humors of Hubert on the new MCM fife with Cocobolo heads joints.

“Just wanted to let you know that I LOVE the new fife so far. Sooooo easy to play right away. Very well in tune so far playing alone. It’s also frickin’ gorgeous too. Thanks so much!”  David A Cabral, Lynn, MA.

“The MCM 10-hole fife has gone above my expectations and proudly represents a quality, high profile instrument. Not only is the fife carefully well-crafted, this fife stands up perfectly to other 10-hole model fifes on the market. The hole sizes allow for louder than average volume without detriment to intonation and tone. Tone is clear but warm throughout its entire range. The fife is responsive even in fast passages, and yet is delicate enough for a variety of dynamic changes. The MCM 10-hole fife by MusiqueMorneaux is a true joy to play.” – Donald Heminitiz, Plymouth, MA.

“… I LOVE this FIFE!!!!!! I felt like a giddy teenager for most yesterday. Jane commented that I never willingly had it out of my hand. She had to persuade me NOT to bring it in when we had dinner at a Thai place in Manchester on the way home. It is so responsive, and very much in tune—both with itself and in terms of blending with the other head joints, and instruments currently in the MCV line. And it actually kept getting better the longer I played it. Very responsive and crisp! I have been playing fife now since 1973, so about 48 years; I served in the Old Guard as a soloist—at least back then—as well as a member of MCV for over 12 years. I haven’t felt this way about an instrument since I got my first really good handmade recorder from Von Huene.” – Bill Phenix, Haverill, MA.

The following video is of MCV playing the MCM model at the Old State House as part of Boston Harborfest. Tune: Horses to America – Greg Bacon. Photo credit – Michelle Godin/MCV.

This fife became the new wave of the fife in the US in the 1960s.  Original concept by John McDonagh who approached Roy Seaman, piccolo maker, to develop this new fife.  It was a marked change from the historical and traditional models everyone was playing on, and it enabled corps that played upon it to up their game in musical composition and performance.  After many years, Roy decided to hang up fife-making and focus on his piccolo business, leaving a former employee Larry Trout to continue making the model.  Roy later retired, selling his piccolo business and his brand name to Gemeinhardt flutes; still later, itching for something to do, he opened a little shop under his wife’s maiden name – Wilson, thus Wilson Woods – and made fifes again for a time.  Cooperman Fife & Drum Co were making this model for a while, but after several years of people placing custom orders and assuring us that Coopermans no longer makes the model, we have decided upon offering it as part of our regular lineup.  With instrument grade African Blackwood (often called Grenedilla) still being relatively expensive to obtain, we have decided to make these in Katalox (say “CAT-a-loash”) wood, unless you specifically request the Blackwood (higher price) or another wood.  I have replicated these from original Roy Seaman made models I obtained in the early 1980s and hold in my collection.  The joint will normally be exactly as Roy had done his, but for a couple of people, I have made it with the internal cork design.  It is offered as a standard 6-hole (Roy’s “J-Model”), 7-hole (for those who wish a D# option), “Basler” 10-hole (Roy’s “L-model” with no thumb hole on the right hand, double hole for F#/F-nat, and left thumb hole placed higher), and “Yankee” 10-hole (like the M-model, but only single hole on the F# top rather than a double).  Be aware, though, that exactly like the original model, this is A=440 (concert pitch) and therefore noticeably flat in pitch compared to the standard pitch (traditional pitch) used by most other fifes! We are experimenting with staining Katalox for a more black tone.  This will provide the “black look” while keeping the price down and using a more sustainable wood.